skip to main | skip to sidebar

How to sell to Entrepreneurs

My study of the 2005 list of Canada’s Fastest-Growing Companies, published by PROFIT Magazine, helped me identify 10 common characteristics of fast-growth companies. These commonalities also suggest appropriate tactics for marketing to these firms.

1) These companies are founded on innovation. They present new solutions to their markets, not business as usual. If you are offering products and solutions that are new and improved, they’d better be genuine improvements, because these firms have invested in innovation - and expect you to do so as well.

2) These firms offer real value in the marketplace: new solutions, better service, lower prices. How else does a new business break into today’s crowded markets? Since these emerging companies create so much value for their clients, they expect value from their suppliers in return. They are most receptive to marketers who also put value and customer benefit first.

3) Most of these companies succeed through productive partnerships with other organizations. These companies understand win-win, and they expect you to, too.

4) Their founders have leveraged personal relationships to get where they are today. They are innovative dealmakers. And they expect no less from you.

5) Being an emerging business doesn’t mean you lack experience; many of these entrepreneurs brought years of industry experience to the table. Expect entrepreneurial clients to combine small-biz focus and agility with big-business discipline and toughness.

The next 5 points? Just click here.
Posted by Rick Spence at 1:33 AM No comments:

The spouse at the centre of the storm

If you think entrepreneurs are a tough breed to figure out, imagine being married to one.

The life of an entrepreneurial wife (or husband) can be filled with tension, uncertainty, hard work and loneliness. That’s all forgotten when the business succeeds and they start buying the brand-name scotch, but it’s a tiring, roller-coaster ride while it lasts.

Remind me to tell you about the roundtable I held at PROFIT Magazine a few years ago, when we gathered some wives of local young entrepreneurs to spill the beans on what life at the centre of the whirlwind is really like. It’s not as easy as it looks.

In the meantime, Laura Bailey of Crain's Detroit Business magazine wrote a story in November 2003 on the hectic lives of entrepreneurs’ spouses. The story itself is beyond the pay wall here, but it makes some great points:

* Robert Dube, owner of Oak Park-based Image One Corp., and his wife, Emily, are so busy they have to schedule a special weekly lunch to discuss family issues.

* "It's almost like there's a third party in your marriage,'' said Melanie Zauel, whose husband, Brian, co-owns Wixom-based Cornerstone Engineering, a full-service architectural firm that today has 19 employees. "Sometimes all of his energy is used up in work, and there isn't anything left for the rest of the family.''

(Not that she’s complaining. "I wouldn't want to be married to somebody who is miserable because he is working for somebody else,'' she added. )

* Work-life balance is one of the biggest concerns for entrepreneurs, and often it's up to the spouse to keep that harmony.

* Another issue that entrepreneurs grapple with is finances. Money provides ammunition for fights in any marriage, but for entrepreneurs it's worse.

"There's not a person in the (Young Entrepreneurs Organization) that does not have their house and personal assets on the line,'' said Tom Nardone, president of Isdera Corp… YEO is a support group and networking organization for entrepreneurs under age 40 with $1 million or more in annual revenue, and Nardone said work-family balance is the group's biggest issue.

* And don't think the husbands of business owners get off easy. “I maybe do some things (around the house) that some of my friends don't do,'' such as more laundry or evenly dividing the household chores, said David Cattermole, senior design engineer for Troy-based Compunetics Inc. He is married to Laura Cattermole, founder of Farmington-based IT staffing company RemTech Business Solutions. For example, he cooks and she washes or vice versa.
"We're a team,'' says David.
Posted by Rick Spence at 8:57 PM No comments:

I just drove back from Kingston, where I MC’d the second of four regional “Global Traders” events for the Ontario government.

The awards ceremony featured some fantastic comments from the winning entrepreneurs. Spurred on by my challenge to share some of the secrets of their exporting success, they talked a lot (we finished 20 minutes late), but offered great advice and made some memorable points.

I taped them on my handy pocket recorder, so I will blog about them when I have time. But I wanted to share one highlight with you.

This is from memory, so it may not be word for word, but one of the winners simply nailed the paradox of the busy, often selfish life of the typical entrepreneur. “You have to have a really supportive family to back you up,” he said, “or no family at all.”

I mentioned in my MC remarks at Global Traders yesterday that entrepreneurs can be a suspicious, cynical lot. That’s quite ironic, in a way, since many of them tend to be so idealistic and positive in their everyday outlook.

But it could be a necessary learned defence. Idealistic entrepreneurs realize early on that few other business people are as committed as they are to creating value or building long-term relationships. They learn to view others with suspicion as their default mode.

It may also be tied up with entrepreneurial ego.

“This brings me to a topic I discuss often - filtering.

“Just because something is in print (or on the Internet) does not make it true. I am very wary of ulterior motives. I am also aware that I need to accept others' opinions just as ideas and filter them. Accept the ones I like and reject or modify the ones I do not.”

So that’s one entrepreneur’s worldview. Listen. Filter. Reject or Modify.
And watch for ulterior motives.
Posted by Rick Spence at 3:37 PM No comments:

An entrepreneur’s most precious resource

Why, someone asked me today, do marketers need to pay special attention to the needs of business owners? What makes small business different from standard business markets?

Luckily, I was able to illustrate this need by recounting a conversation I’d had just an hour before.

We were at the Ontario Global Traders awards in Barrie, where I was working my passage as emcee of the luncheon. In the morning, however, I attended the related Export 360 forum, where various speakers offered their advice to prospective global traders. One of them even mentioned an “export-readiness” quiz that rookie exporters could take online to determine whether their company is well enough prepared to sell its goods or services abroad.

“And it only takes 45 minutes,” she said. As if that was a good thing.

That struck me as a long time, so I leaned over to the entrepreneur who was sitting beside me and asked, “Would you spend 45 minutes filling out an online questionnaire?”

I’ve known this man for 10 years. He’s a genial, low-key guy. But his eyes were blazing as he spat out, “Never!”

He went on to note that most entrepreneurs don't have 45 minutes to eat lunch, let alone spend that time filling out an online quiz. He seemed quite offended as he added, “Who do they think their market is?”

I agree with him. Savvy marketers to entrepreneurs would show much more respect for their prospects’ time.

Most entrepreneurs would kill to find a 45-minute hole in their schedule – so they're not about to spend that time taking a quiz. Sure, they might learn something useful about their business and its export-readiness – but that’s a pretty vague payback when you balance it against all the other opportunities entrepreneurs would happily chase if they had more time.

A 45-minute quiz may work for a large organization loaded with expert analysts whose jobs involve acquiring intelligence. But for busy entrepreneurs and their multitasking workforce, this goes to the bottom of the priority list, somewhere ahead of buying new tea towels but just behind alphabetizing their business-card collections.

As my friend sort-of said, “Know your market.” And remember that time is an entrepreneur’s most precious resource.
Posted by Rick Spence at 11:58 PM No comments:

I was invited this week to a basketball game with a very successful Canadian entrepreneur who owns season’s tickets to the Raptors. I was flabbergasted when we reached the seats – centre court, second row. We were so close that if this had been a Leafs’ hockey game, our seats would have been on the ice. 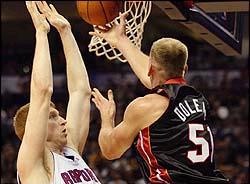 My friend is very proud of his seats, but also slightly embarrassed. They cost a lot of money, but he insists they are his only indulgence; there aren't many other things he wants or needs to buy (he drives a Toyota Prius to save money on gas).

In fact, he says he has turned down seats in the front row (apparently they cost $300 more each, per game, than those in Row 2). He couldn’t justify the cost. (Note: He could afford it. Just couldn't justify it.)

I think there are a few instructive notes to take from this experience, for anyone targetting entrepreneurs as a market:

* Entrepreneurs are price sensitive (okay, cheap). They know the cost of everything and the value of everything.

* They don’t hesitate to indulge themselves when they wish to. The sky’s almost the limit.

* Successful entrepreneurs are often embarrassed about their wealth and the things it can buy them. But beyond their homes and one or two indulgences, their needs really are few. To them, business is definitely about competing and winning, but once their basic needs (and highest indulgences) are met, the monetary rewards are secondary.

* If you're marketing to entrepreneurs, they probably don't have a budget (unlike corporate customers) for what you are selling. But if you can convince them they need your product or service, they’ll find the money.

* If they come presold, as my friend with his b-ball tickets, price is not a problem: the sky is almost the limit.

My friend also commented on the many other entrepreneurs he sees at Raptors games. It’s as if, competitive by nature, the best way for them to wind down is by coming to see other high-level professionals compete. Adrenalin: the best way to finish your day.

(As you might expect, my friend plays recreational basketball. And he hates to lose.)
Posted by Rick Spence at 9:17 PM No comments:

Rick Spence
Writer, speaker and consultant on business growth, entrepreneurship and opportunity. Former editor of PROFIT Magazine, former national entrepreneurship columnist for the Financial Post. My speaking topics include innovation, best practices, social media, and the future of business success.
Please e-mail me: rick (at) rickspence.ca
Because some of you have asked: (416) 231--8920